Margaret took friend Sylvia out to lunch to take her mind off her breast cancer treatment, she had no idea that the date would save her life.
—
The ladies chatted about the importance of regularly checking their breasts, with Sylvia telling Margaret what symptoms to look out for, and encouraging her to have a “squash and squeeze”.

That evening Margaret followed Sylvia’s advice and checked her breasts in bed.  She immediately felt a lump and her husband Bill urged her to make an appointment with her doctor.  Margaret was referred to the breast clinic for further investigations, and on Friday 9th December 2012, she received the news that she had breast cancer.

Margaret was so grateful that Sylvia had taught her how to check her breasts otherwise she might not be here to tell their story.  If she hadn’t found the lump when she did it could have gone undetected until her next mammogram at the end of the year.  As the diagnosis was a very rare and aggressive type it could have been too late by then.  She feels very lucky.

They had known each for over 20 years as nursing colleagues at Murray Royal Hospital.  Since they have both gone through breast cancer treatment their friendship has really grown.

Sylvia was just beginning chemotherapy at the time Margaret shared her diagnosis, so it was a lot to take in.   They had different types of breast cancer, Sylvia had HER2 positive and Margaret had a rare form of triple negative.

They joined the support group and continue to attend and now organise events. 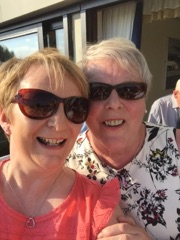 *UPDATE* Our next meeting is

Our next meeting is on Monday 4 th October  at 11am mean time but I am trying to arrange an evening meeting. I am in discussions with the Mustard Seed as the church is not permitting any evening meetings.